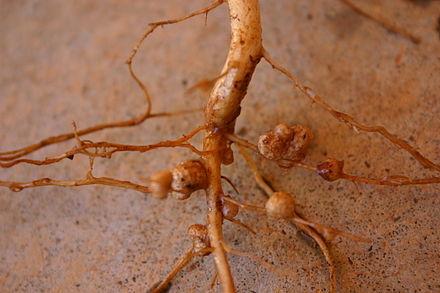 This collaborative project with Birgit Scharf at Virginia Tech focuses on chemotactic signaling in  Sinorhizobium meliloti, a bacterum that fixes nitrogen, converting atmospheric nitrogen to a biologically usable form. Chemotaxis enables motile bacteria to move away from harmful and towards beneficial chemicals. One unique group of motile soil bacteria are rhizobia, which can engage in specific symbiotic relationships with leguminous plants such as peas, soy beans, and alfalfa. This symbiosis supplies the host plant with nitrogen, which is the most limiting nutrient for plant growth. The process of chemotaxis allows rhizobia to recognize and move towards its host, which improves the symbiotic relationship, and consequently, enhances plant growth. Multiple chemoreceptor proteins are being used by rhizobia to sense a wide spectrum of chemical compounds secreted by the host plants. However, little is known about the specific processes involved in the regulation of sensitivity and adaptation, which are essential features for an effective chemotactic response. The overarching goal of this project is to decode the pathway that controls stimuli adaptation. Outcomes will transform our current concepts of the biology of bacterial chemotaxis and their interaction with their eukaryotic hosts. The results of this research can directly benefit future agricultural and environmental issues.